Machiavelli knows how to sell high-tech products to mainstream consumers

Moore describes how to cross the chasm of tech-adoption. Machiavelli how to maintain power in a newly conquered kingdom. How does this work together? 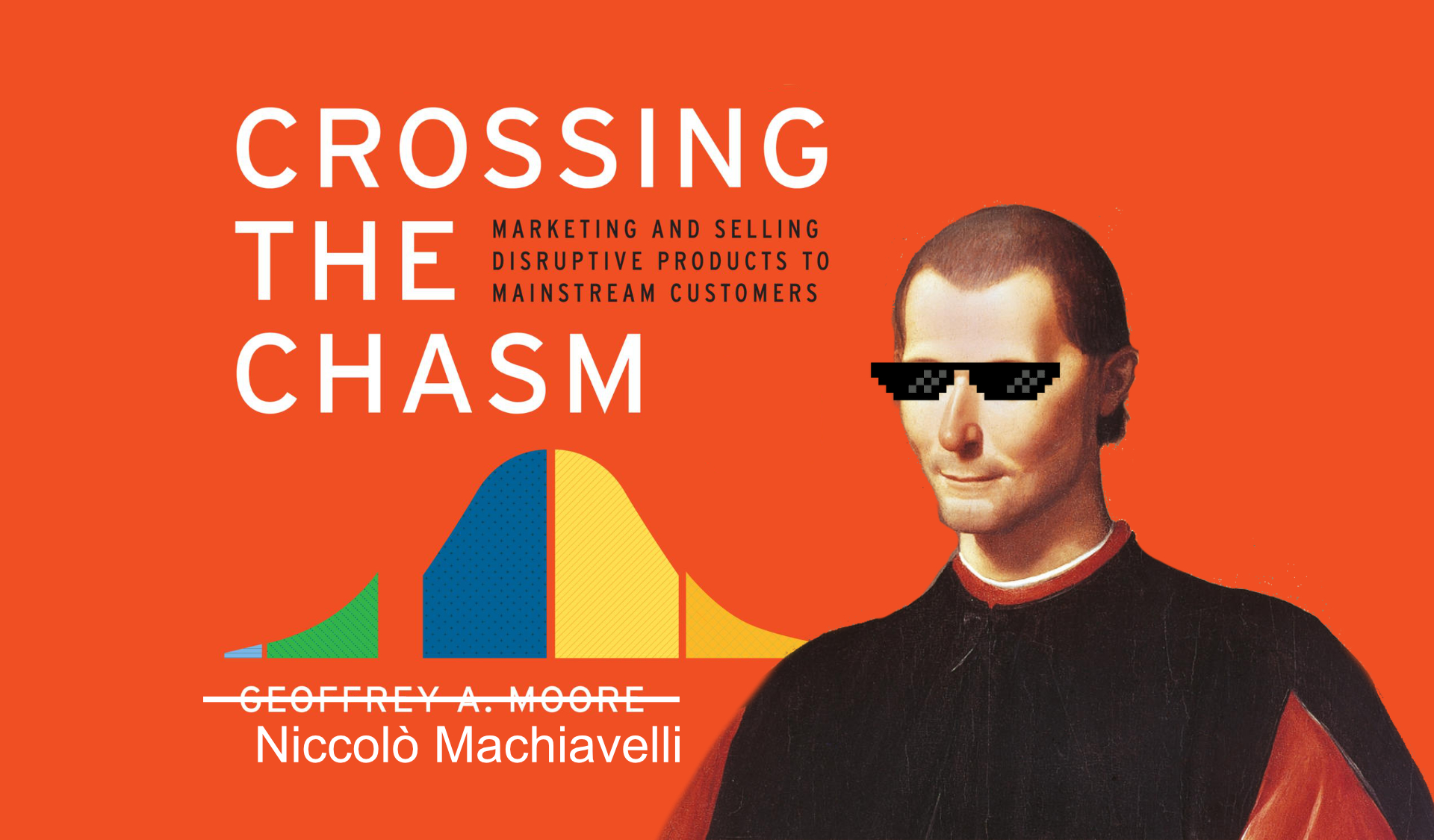 I read exactly one book about marketing which is Crossing the Chasm by Geoffrey A. Moore. With The Prince by Niccolò Machiavelli, I also read just one book about political science and strategies. And when I finished both I had an odd feeling that some of those strategies would work perfectly together.

Do you eat the marshmallow in front of you right now or do you wait for an unknown amount of time to get another one?

The delayed gratification test in 1972 led by psychologist Walter Mischel perfectly pictures the struggle we all have, when it comes to earning quick wins vs. going through pain for a bigger reward. Especially in a work environment, we all tend to choose the latter.

At the recent Media Innovation Camp I included a quick survey into my session. The result was that under the participants, only around 40% use data analytics before a communication activity. And only 30% use data to distribute content dynamically. So there is a lot of transformation potential, especially when you think of all the advanced analytics tools already available on the market.

A great tool is nice. But how do you convince your customers that they should alter their behaviours and integrate the tool into their workflows? How do you get your tool on track?

Geoffrey A. Moore describes in his book that the fundamental principle is to target a specific niche market and focus all your resources on achieving the dominant leadership position in that segment. To pull that off, he suggests a four-step plan called the D-Day analogy.

We are already deep into war metaphors. After conquering a country, the natural next step is to hold your power and maintain influence. And this is where chapter three of Machiavelli’s The Prince comes into play, where two different scenarios are described:

If conquered territories are similar in customs, do not change their way of life.

Which should not be a big problem, because you developed a solution, targeting a specific use case anyway. So a mistake would be to try changing all other behaviours and workflows, too. Don’t alter meeting structures immediately. Keep most of the working environment as it is so that the new tool feels like a natural addition to it.

If new territories are different in customs, the best methods are to go and live there yourself […] and to guard against foreign powers.

Eventually some of the workflows will be altered by the new tool. I mean that’s the whole point of it, right? But here it is important that your work shouldn’t end with the distribution. Rather you should try to make the tool a vital part of the users’ workflows. For example by getting a slot in their weekly team meetings. Or by scheduling 1-on-1 meetings with the most enthusiastic users, helping them with their problems and then presenting those success stories again in the meetings.

It also comes in handy if there is a community platform like Yammer available, where you can set up a group and fuel community effects. Users with success stories can easily be motivated to share those. They will see themselves as ambassadors who will even happily answer questions from other users.

No one likes being told what to do. So in my opinion you definitely can use Machiavelli’s tactics for crossing the chasm, in which it is often more important to get the “common people” on your side rather than the “ruling class”. And this doesn’t work just with a great tool and a one shot effort at implementing it.

Please leave a comment when you enjoyed this article. Or share your own experience about the pain of transformation and ways to ease it.